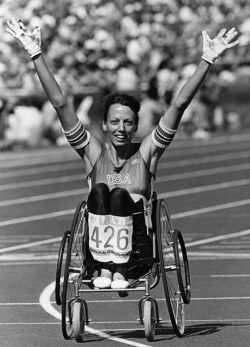 Sharon Hedrick received two Masters’ degrees from the University of Illinois, in 1982 and in 1986. Sharon was the first female wheelchair competitor in the Boston Marathon, competing in 1977. That same year, she won the Top Female Athlete Award at the National Wheelchair Games. She was also the first wheelchair athlete to win in the 1984 Olympics, and the only US athlete to win gold in both the Olympic and Paralympic games. She has won several other medals in both the Olympics and Paralympics, and received several honors, including becoming the first woman inducted into the National Wheelchair Basketball Association Hall of Fame in 1994.
Skip back to main navigation