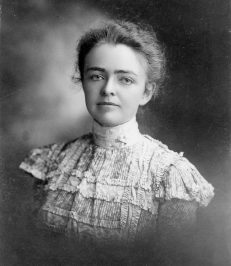 Katharine Lucinda Sharp completed her library science degree at the New York State Library School in 1892 under the tutelage of Melvil Dewey, creator of the Dewey Decimal system of library classification. At the recommendation of Dewey, Katharine served as founding director and university librarian for the first library science program in the Midwest at the Armour Institute in Chicago in 1893. Four years later, the program moved to Urbana and was renamed the Illinois State Library School. Katharine created the first curriculum and built a firm foundation for the school, establishing a program of excellence that remains to this day.