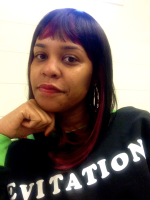 Ruth Nicole Brown graduated from the University of Illinois in 1998 with a degree in Political Science. She began teaching at the University of Illinois in 2006 and is now an Associate Professor of Gender and Women’s Studies and Education, Policy, Organization and Leadership. In 2006, she founded Saving Our Lives, Hear Our Truths (SOLHOT) an ongoingpractice-based, publicly engaged, collectively organized space for Black girls to envision Black girlhood anew. Ruth Nicole also envisioned and spearheaded the Black Girl Genius project, a multi-media convening of incredible talent on campus that launched in 2014 and has occurred annually since. She is the author of two books, edited collections, and several articles. In addition, Ruth Nicolehas written, produced, and performed in several plays. Ruth Nicoleis an engagedpassionateteacher and she has effectively mentored numerous graduate students over the years.
Skip back to main navigation