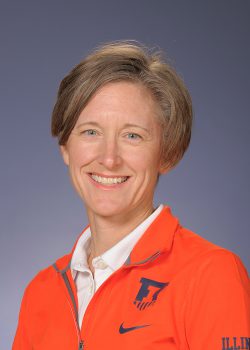 Renee Heiken Slone graduated from the University of Illinois in 1993 and then became the head coach for the women’s golf team at the University in 2006. Throughout her career as a student athlete, Renee was a three-time All-American, claiming three straight top-10 finishes at the NCAA Championships. She also was a two-time Big Ten Player of the Year, two-time Big Ten Championship Medalist, and two-time U of I Dike Eddleman Female Athlete of the Year. After her stellar Illini career, Renee continued playing golf as a member of the LPGA Tour and also spent time on the Futures Tour and the Ladies Asian Tour.
Skip back to main navigation