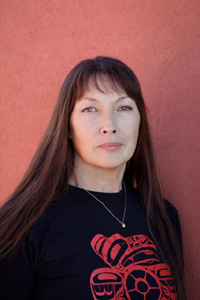 Charlene Teters graduated from the University of Illinois in 1994 with a degree in painting. As a student, she reacted strongly to the performance of a pseudo-Native American dance by a student portraying Chief Illiniwek at a basketball game. She began to protest outside athletic events while holding a sign that said “Indians are human beings.” Her efforts led to widespread activism on campus and beyond to retire the chief as the mascot of the U of I. The University of Illinois’ Board of Trustees did retire the chief in 2007 in name, performance, and symbol. Charlene appeared in the film In Whose Honor by Jay Rosenstein about the subject of Native American imagery in university athletics across the U.S. As an alum, she is a prominent activist.
Skip back to main navigation