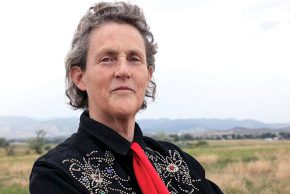 Mary Temple Grandin graduated with a PhD from the College of ACES in 1989. Mary is a well-known professor of animal sciences, but she is best known for being one of the first individuals on the autism spectrum to speak out about her experience with autism. She has authored several books and articles, both about her personal experiences as well as research regarding livestock. In her research, she was one of the first scientists to discover animal sensitivities to visual distractions in handling facilities. Temple developed a major piece of handling equipment, known as a center track (double rail) conveyor restrainer system for holding cattle during stunning in large beef plants. In 2010, Mary was named one of Time Magazine’s most influential people in the world. She has received numerous awards and honorary degrees, and in February 2017, she was named to the National Women’s Hall of Fame.
Skip back to main navigation