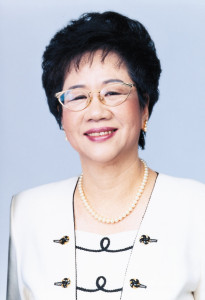 Annette Lu Hsiu-lien graduated from the University of Illinois with a degree in Law in 1971. She established herself as a feminist advocate in Taiwan through her writing, including a book titled New Feminism. She was an advocate for democracy in Taiwan and imprisoned for over five years for speaking out against the government during the Kaohsiung Incident. While imprisoned, she wrote a novel titled These Three Womenthat eventually was adapted for a television screenplay. In 1993, she was elected to the Legislative Yuan and Magistrate of Taoyuan in 1997. She went on to become the Vice President of the Republic of China (Taiwan) from 2000 to 2008.
Skip back to main navigation