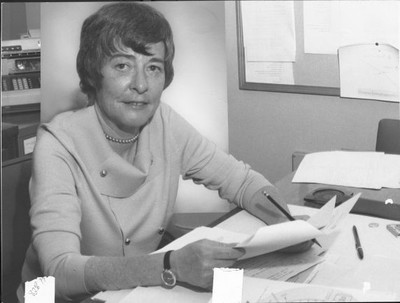 Barbara “Bobbie” Crawford Johnson graduated in 1946 with a degree in General Engineering, the first woman to earn such a degree. After graduation, Bobbie went to work for North American Aviation later to become the Space Division of Rockwell International, where she worked on the Apollo missions. NASA recognized Bobbie in 1973 with a letter of commendation from astronaut Fred Haise Jr., and a medallion commemorating her contributions to the Apollo 11 mission. The College of Engineering at the University of Illinois named her a 1975 Distinguished Alumni (the first woman to receive this award) for “her originality and technical contributions to space flight dynamics of missiles and manned vehicles, for her unusual capacity to be a contributing member of a team as well as an inspiring leader able to manage both people and projects.” The American Astronautical Society granted her the Dick Brouwer Award in 1978 to honor her “significant technical contributions to space flight mechanics and astrodynamics.”