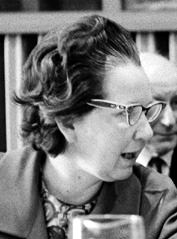 Jane Fauntz Manske graduated around 1932 with a degree in Art Education from the University of Illinois. Jane was a national champion swimmer and diver who competed for the USA Olympic team in 1928 and 1932, winning the bronze medal in springboard diving in 1932. In high school, Jane was unable to compete in high school swimming competitions because of a ban on female interscholastic athletics in Illinois. As a student at Illinois, Jane competed for the Illinois Women’s Athletic Club swimming and diving teams. As a student, she was also a member of Kappa Alpha Theta. Manske was one of the first female athletes to appear on the Wheaties cereal box.